The patrimonial vines refer to those grape vines to produce wine with vines planted in Chile at least more than one hundred years ago, and although its concept is still not very clear, we will go back to the time of the colony to understand a little better what this concept is about that gives historical value to the wines of Chile.

Here you can read

Since the time of the Spanish conquest on the American continent, vitis viniferas plants can be found in different regions of Chile, which were brought by missionaries for the purpose of celebrating Mass. They brought with them some of the best vines in Spain, which by then was a very good producer of grapes. These plantations were mostly of the country variety, and to a lesser extent, muscatel. Later, the Cinsault vines were also added...

From these vines, quality wine continues to be produced in a sustainable and natural way. They are present in some regions, where wines are produced with ancestral and traditional techniques, without chemical additives, resulting in a product with history, expression and above all excellent quality.

Although some experts classify those first varieties that arrived in Chile during the Spanish colonization as heritage strains, others assure that the term "heritage strain" actually refers to a form of production, which goes far beyond strains. While some claim that it has to do with both, that is, it is a form of wine production with those ancestral vines.

With this we can understand that a historical vine is not the same as an ancestral vine and a patrimonial one. So what do we mean in Chile when we talk about heritage strains?

According to ProChileAn institution of the Ministry of Foreign Affairs in charge of promoting the exportable supply of Chilean goods and services, to speak of heritage stocks is to speak of "long-standing wines from the Maule and Biobío regions, in which their producers are making an effort to revalue this ancient product, which is over 100 years old. Particular varieties of grapes, added to their geographical location and their artisanal production process, result in special wines".

Innovation and quality with historical stamp

Paradoxically, heritage strains are relatively new in the market, although they involve hundreds of years of Chilean history and tradition in their content and elaboration. 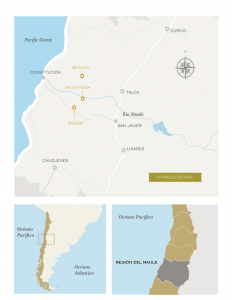